Meet the woman who worked in cahoots with embattled  ‘ex- Second Lady’ Mary Chiwenga in her fraudulent dealings which have recently been exposed.

Mary, who is currently at the centre of a nasty divorce with  Vice President Constantino Chiwenga, has been on everyone’s lips in the past few days after her much-publicised fall from grace and ultimate arrest.

The once flamboyant second lady has had a rough couple of days. After the charge sheet was released or rather leaked to the public, a name kept popping up every one or two paragraphs and that name belongs to a certain Memory Chakuinga. iHarare had to dig a little deep to find out more about this Memory character who seems to be in the midst of all the externalisation claims.

Listed on LinkedIn as the CEO of Falcon, a Johannesburg based company, Memory is believed to be the one who brokered and signed deals on behalf of Marry. The deals include 3 state of the art Range Rovers, a property at a golf range In Pretoria as well as furniture.

Read some of the excerpts from the charge sheet were the accused person’s name is mentioned several times;

During period extending from October 2018 to May 2019, the accused would instruct Memory Chakuinga who is the Managing Director of two South African based companies namely Falcon Projects Pvt Ltd and Bonnette Electrical Pvt Ltd which are based in Pretoria, South Africa to raise proforma invoices for the purchases of either event tents and chairs or prepaid household electrical meters. The invoices would then be referred to CBZ Bank on the pretext that the accused wanted to purchase the event tents, chairs and prepaid meters for consumption in Zimbabwe, when in actual fact the accused knew very well that after the funds were transferred to South Africa, she would then divert them for other personal purposes.

Sometime in November 2018, the accused instructed Memory Chakuinga to come up with a proforma invoice for the supply of event tents and chairs which were then sent to CBZ Bank and also to the accused. On 17 December 2018, the accused on the strength of the proforma invoice, caused CBZ Bank to transfer two hundred and one thousand eight hundred and forty-six dollars and eighty-one cents (US$201 846-81) through Outgoing Telegraphic Transfer into Falcon Projects Suppliers Private Limited South African FNB Bank account number 62576755105. 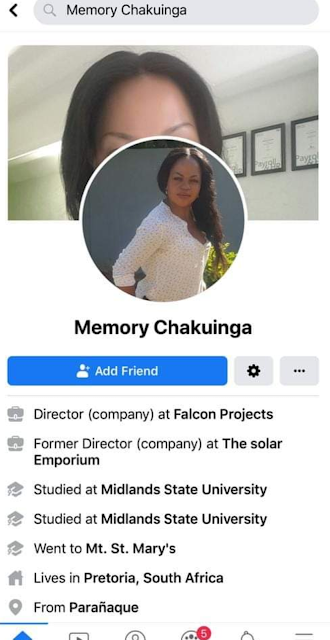