788
VIEWS
Share On WhatsAppShare on FacebookShare on TwitterShare On LinkedIn

The lead investigator on the cases of Vice President Constantino Chiwenga’s estranged wife Marry Mubaiwa Chiwenga has been a victim of social media hacking.

Zimtrending learnt from iHarare  that Detective Assistant Inspector Luxon Saurowe ,the leading the investigator on allegations being faced by Mary Chiwenga was hacked and perpetrators are yet top be nabbed.

However, the hackers who are suspected to be foreigners use the moniker “Group 6” to describe themselves. The hack occured after Saurowe opened a malicious file which seemed innocent that had been sent to him by the hackers without realising what it was.

According to online publication, Zimlive, Group 6 hacked Saurowe’s phone and locked him out of his WhatsApp. They then went on to post an image of a naked woman on his WhatsApp status. The image is captioned,

“The world wouldn’t be a better place if there were no consequences for our actions. We are watching over you /Group6/. 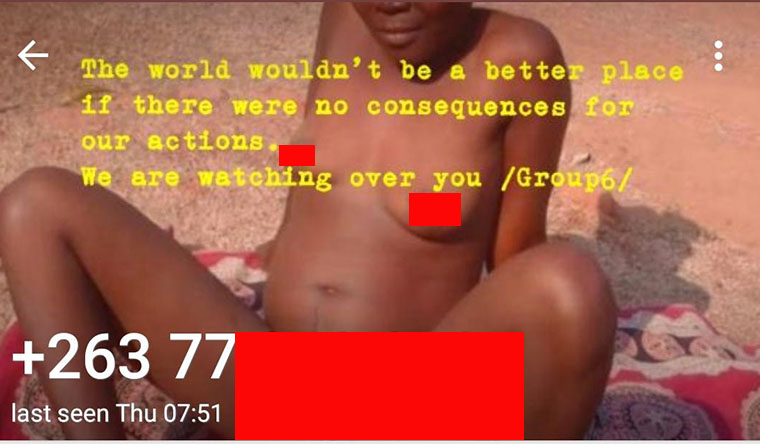 After apparently failing to regain control of his WhatsApp to remove the offensive picture, Saurowe apologised to his friends and family on Facebook and explained the mishap saying,

“An apology to all my Econet WhatsApp contacts and family members and friends. My account is hacked and is displaying pornographic material on the profile picture. I am unable to access the account such that I may delete the account.”

A police source who spoke to Zimlive added,

“He started receiving threats on his phone from people using South African, United Kingdom and United States numbers. The hackers accused him of being used to persecute innocent people. This all started after he was appointed investigating officer in the Marry Mubaiwa case. It’s linked,”

However, National police spokesman Assistant Commissioner Paul Nyathi insisted that the hack was not related to the arrest and investigation of Marry Mubaiwa Chiwenga.  Said Nyathi,

“It has nothing to do with the case he is investigating. Some people sent him a message on WhatsApp informing him that they wanted to send him some material and that’s the material that caused his phone to be hacked. The issue has nothing to do at all with Mubaiwa’s case,”

The embattled former model is facing numerous allegations which include,  six counts of illegally externalizing funds well worth over one million United States Dollars, five for money laundering and one for fraud where she allegedly forged a marriage certificate.

The charges alleged that she illegally solemnized a secret marriage presided over by Acting Chief Magistrate Munamato Mutevedzi without Chiwenga’s consent. She is also facing charges of attempting to kill the Vice President when he was critically ill in South Africa.