Ruvarashe Gumbochena, a Bulawayo-based nurse aide has been arrested after she posed as a doctor on Facebook.

The nurse aid was pictured holding a syringe after she broke into an unrestricted area at work, donned a dustcoat and claimed she was a doctor on social media.

She was busted when her former boss at Kes laboratory Edward Muringani decided to view her social media pages and was shocked to see her masquerading as a doctor.

“One day when I was perusing on Facebook checking my employee’s social media, at the time Ruvarashe was our full-time employee, I got surprised after I stumbled on her post posing as a doctor and in one of the posts, she stated that she was a medical doctor.

He  said she was just a nurse aide with an O-level qualification and added:

“From her Facebook account, I realized that she posted some of her photos while she was in the laboratory area which is a restricted area and was not allowed to enter and her duties do not allow her to do so. By doing so she acted against the Health Professions Act.”

However, Ruvarashe denied the accusation.

“I do not agree with the above-stated crime. I acted out of knowledge and Facebook is a social platform. I posted for the love of being famous on social media. It was just for fun,” she said in her warned and cautioned statement.

She is set to appear in court soon.

Zimbabwean Female Auto Mechanic On The Rise In SA

Check Out the New Features On the “New Currency” 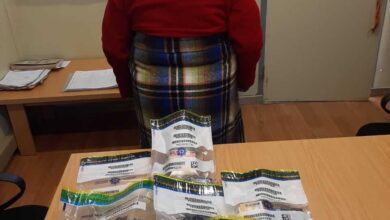 Stunner Claims That All Men Are Dogs