17 Passengers have been left Injured after a Bus Caught fire

713
VIEWS
Share On WhatsAppShare on FacebookShare on TwitterShare On LinkedIn

At least 17 passengers have been left injured after a bus caught fire on the N1 North, authorities said on Wednesday.

The bus caught fire early on Wednesday morning just after the William Nicol off-ramp. The bus was travelling from Cape Town to Zimbabwe.

Emer-G-Med paramedics received reports of the incident and upon arrival, found traffic at a standstill and the smoking bus stranded in the middle lane.

《Fourways》#M07, #F01, #A02 is currently on scene on the N1 North after the William Nicol Drive off ramp for a bus that has caught fire. Injuries are still being assessed. The N1 north bound has been closed causing massive traffic delays. @GTP_Traffstats @_ArriveAlive 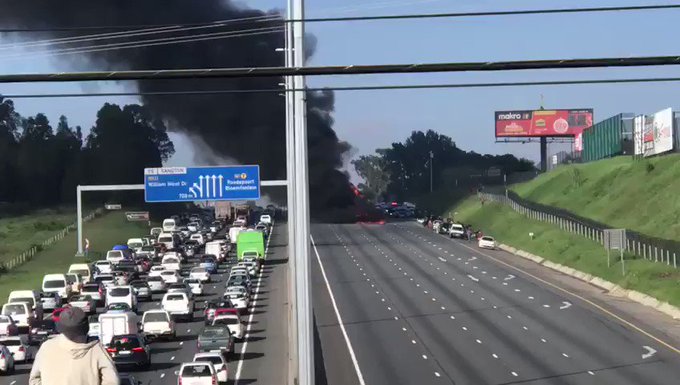 According the company, the bus caught fire after a front tyre burst.

“The bus driver then stopped the bus and as he alighted, the smoke spread to the rest of the vehicle,” Emer-G-Med said.

This resulted in passengers rushing to get off, and in getting injured in the process.

Emer-G-Med confirmed that 17 people sustained injuries and were being taken to hospital. Fatalities could not be confirmed at this stage.

Firefighters are still working to put out the fire, which have since spread to the bus’s trailer.

“We are still going to investigate the cause of the fire but we are fearing an explosion which is why traffic is being diverted off at William Nicol, past Witkoppen, Rivonia Road leading back to the N1,” Minnaar said.

Vice President Constantino Chiwenga has announced stricter lockdown restrictions in an effort to curb the second wave of the Coronavirus...

732
No Result
View All Result